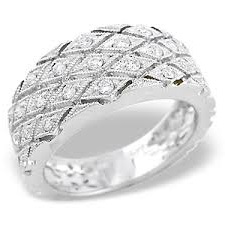 When I first started in the jewelry industry (about ten years ago), “online was a dirty word for most jewelry companies. The independent jewelry store was the prized customer for many, as they could pay relatively fast when compared to some of the major chains.

And if you were a small company that needed working capital, then this was your prized customer. “Blue Nile” was another extremely naughty phrase – any manufacturers that sold to Blue Nile were looked down upon as well; many may have even been shunned.

So what about now? With many independent jewelry stores either closing or limiting their buying, many companies have no choice but to turn to the Internet as their viable selling channel. The “dirty word” is now the Holy Jewelry Grail.

Many consumers equate “online” as being much cheaper, and while sometimes this is true, sometimes this is not. It all depends on how educated the consumer is about jewelry (i.e. metal prices, metal choices, basic manufacturing, weights, etc.).

Gemvara, an online jewelry company that specializes in product customization, is now abandoning the independent jewelry retailer altogether. Gemvara previously allowed buyers to customize their jewelry in stores through web-connected displays. Is this a smart move?

Is this an expensive move? Could be. The cost of doing online business lies in the customer acquisition costs. A company like Blue Nile used to do millions of dollars per month in online advertising. Today you can in theory get around some of those costs with Search Engine Optimization, but that requires a level of investment as well.